Jerry Smith was lead guitar for The Vibrations, Kenny and the Kasuals and co-wrote their top hit "Journey to Tyme"

I know the other day when we were chatting, you told me you played lead guitar. Who was your inspiration?

My dad was an aircraft mechanic at a small executive airport just North of NW Hwy at Jupiter and one day they had a party that dad brought me to it- and that's the first time I ever heard The Nightcaps as they had been booked. I guess I was about 8-10 years old.

I sat there watching these guys and I told me dad, 'that's what I'm gonna do when I grow up!'

Paul Heckmann: Very cool. Any other bands/music that you would listen too?

Jerry Smith: We listened to all sorts of music. Surfing music was really big back then, but we also listened to a lot of blues, Jimmy Reed and Elvis Presley.

Paul Heckmann: And how do you join The Kasuals?

Jerry Smith: I had been up at University of North Texas for a year. Then the next summer I went out to California for a while with another band. While I was gone my best friend Lee Lightfoot joined Kenny's band. By that time they had changed their name to Kenny Daniels Combo.

I knew Kenny from High School. We weren't exactly best friends as we were in 'competing' bands - I was in The Vibrations and Kenny was in The Illusions. The Vibrations played a lot at the Harry Stone Recreational Center in Casa View, churches, schools, sock hops and so on. It kept us busy while we learned what we were doing.

Kenny and I were also lifeguards together over at the Lamplighter Motel. So anyway, push came to shove and I ended up joining his band playing lead guitar.

The Lamplighter also had a part in Kenny and the Kasuals history. They would have bands play on the weekends at the Lamplighter Club. That's where Mark Lee saw them. His mother heard them and said 'I just heard a band better than the Beatles!' So Mark went over and heard them and convinced them to sign with him. He didn't have any band management experience at that time, but he had drive. For the most part overall, I think he did a pretty good job. Anyway Mark took over and changed their name to 'Kenny and the Kasuals'.

Paul Heckmann: Mark was pretty important to the Kasuals top hit, wasn't he?

Jerry Smith: Yes he was. He was the co-writer of "Journey to Tyme". I wrote the music and we collaborated on the lyrics. It was the only song he and I wrote together. We actually wrote it at 'The Studio Club'. He and I went up to the balcony and wrote it while the rest of the band was downstairs getting their stuff together to rehearse.

We worked a ton at the Studio Club. I really loved playing there. I think we were playing there 2 or 3 times a month. The acoustics were great. It was like playing in a movie theater, there was a big stage with balconies on the side with a dance floor up front and tables underneath the balcony.

And we opened for the Yardbirds there.

Paul Heckmann: That's amazing! Those guys are in the Rock and Roll Hall of Fame.

Jerry Smith: Jimmy Page was with them then. We opened and played a full set, then they played a set, then we did our second and they finished up

Jerry Smith: We also opened for the Turtles at Louanns. I think we played in the big room that night. We also played the smaller room quite a bit

We were buddies with The Chessman who would play there all the time, Jimmy Vaughan was with them then. We would go over to Jimmy's house and there would be Stevie, a little gawky kid (with a laugh) hanging around. We would say 'hey stevie' kidding of course (in his best big brother's friend voice) and pick on him a little. but he was a good kid.

Jerry Smith: We did a lot of openings too about that same time. We opened up for The Beach Boys, Sonny & Cher – God, there's so many, I don’t even remember them all. and we also played on WFAA's 'Sumpn'Else' TV show.

We thought we were our way to the big time when we were invited to NYC and on the billing to open for the Beatles at Shea in 1964. Something happened in the red tape, we lost the gig and came back to Dallas. 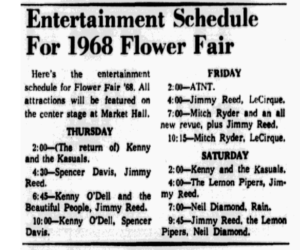 Paul Heckmann: That is a tough one. Was that why you left the Kasuals?

Jerry Smith: We kept going for a while but things weren't the same after that. We had reached for the stars and just missed. I guess I was getting the urge to move on. And then I was drafted, I ended up joining the Air Force. Kenny was also drafted and was about to go into the Army. It was a different time.

But before we went to do our Service, Mark Lee put together one last hurrah for us, The Flower Fair in 1968.

Jerry Smith: Yes, and I think Kenny left for the Army a day or two later.

After that, the rest of the band formed "Truth" and brought in Dale Bramhall, Doyle's twin brother as the lead vocalist. That didn't last that long and then I left for the Air Force. So that was that.

Back in 1980, I went out to Ruidoso to visit Kenny who had moved out there. We decided to put together Kenny and the Kasuals once more. Mark Lee came out to manage us and we headed out on a West Coast tour.

Around 1985-87 Alan and I formed a duo, The Marvelous Woo Brothers. Which of course was the forerunner of The Legendary Woo Brothers of today!

Paul Heckmann: So, what kind of work you do these days?

Paul Heckmann: And of course, you are spending a little time cranking out the hits with the Legendary Woo Brothers!

Well, this has been fun. Thanks so much for your time.

And we will see you on Aug 3rd, 2019 at Ozona at our next Extravaganza. Jerry Smith and the Legendary Woo Brothers are our headliners!

We had such a great time at Ozona on Aug 3rd. Mark Lee was there, Angus Wynne, his lovely date Catherine, Jerry Smith, Jackie Don Loe, Billy King and Peter Kaplan, Mike McCullough, not to mention dozens of members of Memories of Dallas. Be sure to come join us on the FB page or subscribe to this one for further updates

Angus Wynne III
This was one for the books! Talk about Memories: it would be hard to top a date at Ozona with Jerry Smith and the Woo Brothers!

If you didn't make it but still want to support the work we do, the interviews, the events and of course the legal expenses of running a Non Profit, please go to

This site uses Akismet to reduce spam. Learn how your comment data is processed.